Who can get these strays or abandoned dogs/cats off the streets?

The stray dog/cat population is actually the responsibility of the City Vet/Pound through the City Health Department.

You may report the strays or abandoned animals to them. Under RA9482 The Anti Rabies Act, strays are to be collected humanely by authorized catchers, impounded and euthanized after a certain period (which varies per city: from a few days to a few weeks) if they are not adopted or claimed. Why are they euthanized? ---- This is because your city pound only has space and budget only for X-amount of animals.

The quality of care given by the pounds cannot be guaranteed, however, as they may violate The Animal Welfare Act - i.e., dogs may not be fed, may not have proper shelter, and may not be treated humanely. We've received reports about the treatment impounded dogs get but those informants have not been willing to submit their affidavits so that charges may be filed against pound officials. If you have witnessed cruelty and neglect in your city pound, please submit your affidavit - refer to FAQ: Report Animal Cruelty.

There is no government agency that "helps animals". With the exception of very few cities, government units just give rabies vaccination programs and catch strays for animal control.

IMPORTANT: Learn the difference between ANIMAL CONTROL vs ANIMAL WELFARE.

Give a stray dog or cat a second chance at life.

Some tips for rescuers:

If one chooses to ask an animal welfare NGO like PAWS for help, be ready to provide COMPLETE INFORMATION and be willing to foster or find a fosterer in your initial report (read FAQ: What to do when I see rescues/stray emergencies / how to admit this poor weak animal into the shelter). Delays in rescuing a stray animal in need is usually because the informant/concerned citizen is not cooperative, does not provide complete info, does not inform PAWS of the exact location, is not willing to foster or find a fosterer.

Sadly, PAWS cannot solve all problems regarding stray dogs and cannot take in all strays. Thus, we focus on education efforts so that pet owners will not contribute to the stray population, nor will they abandon their pets. 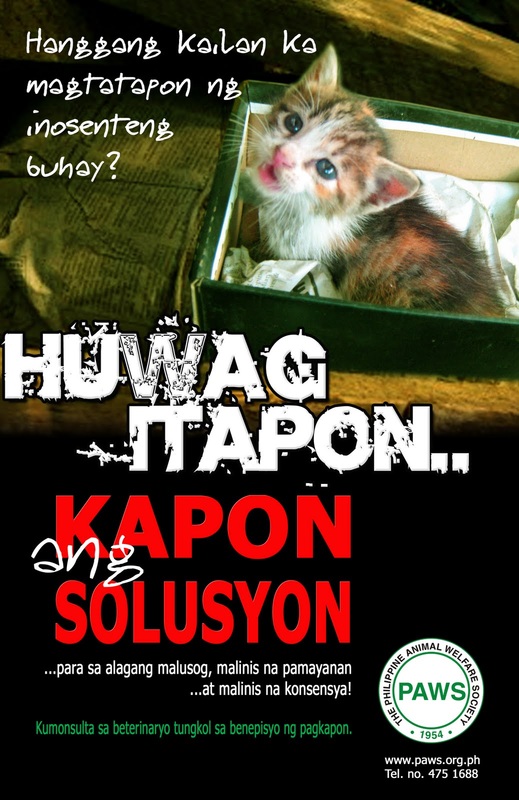