HELP! MY DOG WAS CAUGHT AND TAKEN TO THE POUND! IS THIS RIGHT/LEGAL? 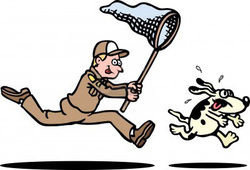 My dog (or my neighbor's dog) was caught and was taken to the pound! Is this right? What do I do?

Under RA9482: The Anti Rabies Act, dog catchers and employees of the city pound are authorized to catch strays and/or loose dogs running around in public using humane methods. Owned dogs out in public that are not under the control and supervision of their owner (i.e., owned dog allowed to roam the streets without a leash and without his owner, owned dog is just outside owner's gate but with no leash, accidentally ran out) are immediately considered strays and are to be captured for the public's safety. Animal control officers and dog catchers do not need to ask permission from the owner to catch and impound these dogs.

Dogs that have been captured by Animal Control officers are placed in the pound where they are kept for a fixed holding period.  Upon the expiry of this holding period, if no one claims ownership of the captured dogs, or no one adopts them, they are euthanized (legal under approved methods of euthanasia stated in Administrative Order 13 Revised Rules on Euthanasia for Animals). The most humane way to euthanize an animal is through barbiturates.

Reality in the Pound. Space is most often limited with as many as 10 dogs being forced into a cage built only for two.  They will also hardly ever be given food or water.  Fights will often break out because of these stressful conditions and many dogs succumb to injury as they will also hardly have access to medical attention.  Pound officials simply won't bother as the dogs will be put down after the holding period is up anyway.

Owners whose pets were caught roaming the streets or public places should claim their pets immediately. The holding period of dogs in the pound vary depending on the city ordinance (from 24 hours to 3 days to 1 week). Yes, there will be a fee to pay to claim your dog, but paying that fee is better than paying with your dog's life.

People can write to the City Mayor directly as the City Pound is under the Health Services Department of the LGU if they want to make a formal complaint on any of the following issues re: dog catchers employed by the City:

We would like to remind everyone to please keep your pets on leash when in public places, regardless of size or of training. Not only is this a responsible thing to do, it is also a requirement stated in the RA9482: Anti Rabies Act. Please download it here for your reference (in PDF format): RA9482 Anti Rabies Act of 2007

Please also keep your pets indoors and/or make sure your home/yard/lot is properly fenced to prevent your pets from running out of your home and being injured by vehicles or picked up by city dog catchers and animal control officers or worse, dog meat traders.

It is inconsiderate to other people and irresponsible to let them run loose outside your gate or property to exercise, "pasyal", or to eliminate (pee/poo) even if it is just for a little while - if you must do so, put them on a leash and take them out for a walk, and don't forget to clean up your pet's mess.

To reiterate:
WALANG ASONG GALA KUNG WALANG MAY-ARI NA PABAYA. There would be no dogs (stray or owned) who would be caught, impounded, euthanized, harmed or killed if there were no irresponsible owners who allow their pets to roam freely outside the home and who spay/neuter their pets.

FRIENDLY REMINDER TO PET OWNERS:
Walang asong gala kung walang taong pabaya. Safe dogs are dogs that are kept inside their owner's yard or home. Whenever you are out with your dog in a public area, keep your dog on a leash and be mindful of your dog. Your dog depends on you to keep him safe. Please do not fail him.

* Public area = outside your gate, on the street / in the park / in the mall / any street, sidewalk or public place where there are strangers or other people around 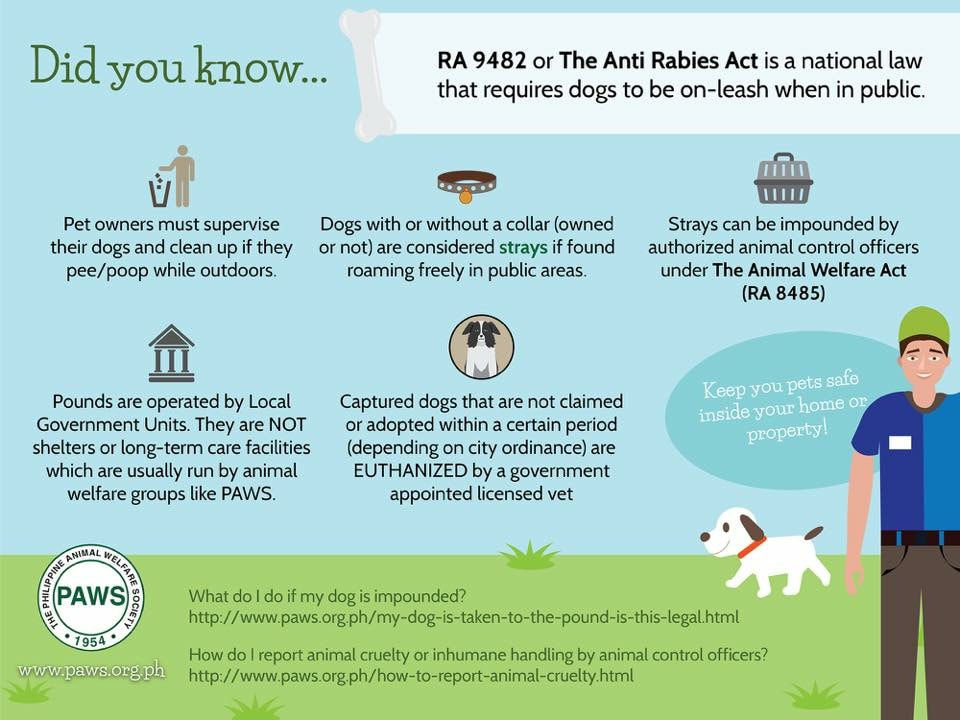 If your city pound is not listed here, contact your CITY HALL or Local Government Office and inquire. The City Pound is under the City Veterinarian's office and/or the City Health office. Contact the City Vet Office to confirm their policies, holding period and claiming procedure. 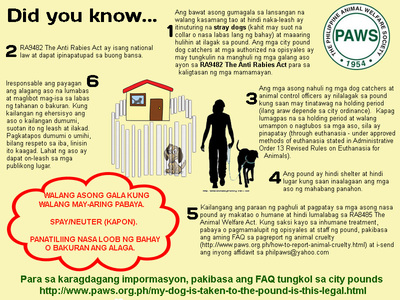 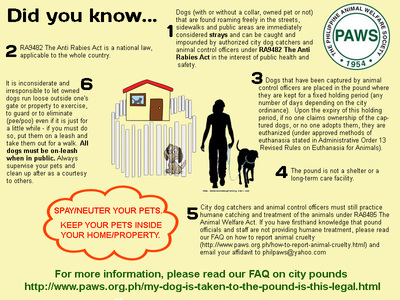