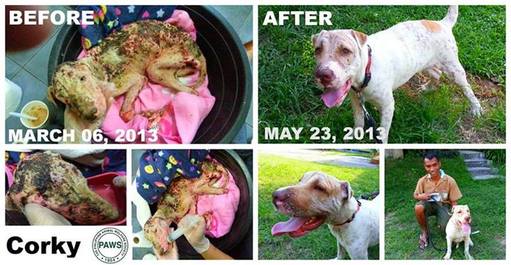 Corky was rescued, almost dead, sprawled in a plant box beside a hospital by volunteers who, ironically, just came out of the hospital themselves. His skin, like his name, was uneven and literally full of holes due to severe mange and infection. His body and limbs were so swollen, he could not even chew food. Volunteers have had to force-feed him through a syringe and change his diaper pads multiple times because of the weeping wounds.

He was fostered by the kind volunteers from SJVets Animal Clinic, who worked so tirelessly to treat his skin and improve his health.

In a short time, Corky recovered not only his appetite but also his healthy skin and vigor! He is now back at the PAWS Animal Rehab Center, and will soon be put up for adoption.

We would like to thank all those who donated Solcoseryl jellies, Silver Sulfadiazine creams and other in kind items that Corky needed during his critical first months. Without you, Corky's recovery would not be this fast and amazing.
PAWS FAQS that addressed this concern: