ACTUAL EMAIL SENT TO PAWS
We are posting this in case the sender misinterprets and manipulates the actual PAWS reply to ruin the credibility of PAWS as an animal welfare org. 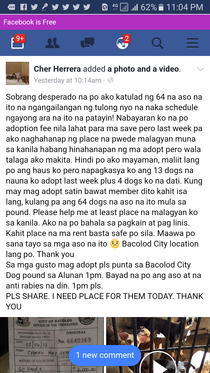 Thank you for your concern for these dogs. Apologies in advance for this lengthy email, but we will take advantage of the opportunity to educate about pounds and animal control vs animal welfare.

You may not be aware that city pound dogcatchers and authorized city personnel such as the barangay are in charge of animal control and are mandated by law to capture strays as well as those pets who are allowed to freely roam public areas such as streets, sidewalks, public parks, etc or not leashed by owners outside personal property pursuant to RA 9482 : The Anti-Rabies Act, a national law for public health and safety - even if the owned pets accidentally ran out from the gate. All handling and impounding done by the city pound should be humane and in accordance with RA8485 The Animal Welfare Act.

We also have to inform you that it is well within the Pound’s mandate to euthanize the dogs they have collected if no one comes to claim or adopt them within the prescribed holding period.  These are all done in accordance with the law as pounds do not operate like shelters.  They cannot turn away calls for collection of stray animals and must always work towards their impoundment as this is their duty.  This what your taxes and mine pay them for.

And because they cannot subject the animals to overcrowding as this would be against the Animal Welfare Act, they also have to regularly euthanize if there are no claimants or adopters for these animals.  It is a sad situation, certainly.  But instead of demonizing the pound who is simply doing their duty, we should be looking at the real culprits of the situation – those irresponsible pet owners who allow their pets to roam outside of their premises without supervision and without a lease (a violation of the Anti-Rabies Act), those who do not have their pets spayed and neutered (contributing to the growing number of homeless animals) and those who choose to abandon their pets for whatever reason.

Compassion can only go so far.  Of the hundreds and thousands who express their sympathy on social media, how many will actually make an effort to come forward and adopt at least one dog?  Even if by some miracle, some rich person or group chooses to claim/adopt all 60 dogs you say the pound is set to euthanize now, what of the 60 new dogs next week? And the 60 more after that? Band aid solutions won’t work.  It is only by addressing the root of the problem that we will ever have empty pounds and every companion animal, with a home.

This may not be what you want or expect to read, but we regret to also inform you that PAWS does not usually go out and try to save dog pound dogs from being euthanized as this approach fails to address the root of the problem, and it also begs the question of why we aren't trying to save the other pound dogs in other cities from being euthanized. PAWS works at prevention -- running programs like kapon and humane education all-year round because this helps prevent dogs from ending up in pounds in the first place. Just in case you share any of the common public misconceptions about PAWS, kindly read this for clarification: http://pawsphilippines.weebly.com/common-public-misconceptions-about-paws.html

We know how hard it is to find adopters - we face the same difficulty as we try to find responsible homes and adopters for our 200+ shelter dogs and cats who are already rehabilitated, spayed/neutered, vaccinated, dewormed. Sadly, there will be more strays, homeless dogs and cats and impounded dogs than those willing to adopt from a shelter or pound. This is why prevention is important.

There would be no need for a city pound or impounding of strays or owned pets if they were not out on the streets in the first place. Strays are not a random occurrence but a symptom of a bigger problem caused by the following:  irresponsible pet ownership, people allowing their pets to roam outside their homes, pet owners not spaying/neutering their pets, people still BUYING and BREEDING instead of adopting or fostering shelter and rescue animals.

This is why PAWS primary mission has been to educate pet owners about responsible pet ownership as this is the only way we would be able to address this problem. And this is by no means a problem that is unique to the Philippines.  Even countries like the United States or the United Kingdom where people are a lot more educated about spay/neuter of pets and pounds are endowed with a much bigger budget, high-kill pounds and the continued proliferation of stray animals are still very real problems.

The only country thus far who has been able to eliminate the existence of stray dogs has been the Netherlands and they accomplished this not by creating more pounds, converting all pounds to shelters or refusing to euthanize.  They succeeded through a concerted effort of educating people about committing to their pets throughout its entire lifetime, implementing free/low-cost spay and neuter projects for pet owners, and strengthening laws that penalize cruelty against animals including neglect and abandonment of pets.

Please click and read this link to know the difference between ANIMAL CONTROL vs ANIMAL WELFARE (this clearly explains preventing the problem vs reacting to the problem of strays and impounded dogs)
http://pawsphilippines.weebly.com/animal-control-vs-animal-welfare.html

Since you feel very strongly against the euthanizing of impounded dogs, you can initiate your own project to promote responsible pet ownership (including spay/neuter) to all your friends and family, and to keep dogs (whether stray or owned) off the streets. You can also start offering your assistance and working with the city pound officials in providing food (i.e., start a food donation drive) and water for the impounded dogs and by helping them looking for families willing to adopt them.

Please help us campaign for spay-neuter of all companion animals so that we can prevent pet homelessness, injured strays and cases of abandonments. Print out the attached flyer, distribute widely and kindly tell all your friends and relatives to have their dogs and cats spayed or neutered and to adopt from shelters and to never buy animals from pet shops. If we do not do this educational campaign, we will all forever be picking up strays/abandoned animals in pitiful conditions without solving the problem for the long-term. It is only by our collective efforts to educate pet owners can we solve the root of the stray animal problem.

PAWS can extend assistance to concerned citizens who have personal knowledge that a) the impounding staff/officials actually sell the dogs or kill the dogs for pulutan; b) that cruel methods were used to catch the dogs; c) cruel methods were used to put the impounded dogs to sleep (like the use of tambucho gassing), or d) if you have personally observed that the pound officials neglected to provide provide proper care, shelter or nourishment for the dogs. If the pound is not practicing humane methods of catching or euthanasia, please provide us with the name of the City Vet, the address of the city pound and submit an affidavit stating what you have witnessed. Click here to download the Sample Affidavit. You may also refer to the guidelines on How to Report Animal Cruelty (http://www.paws.org.ph/how-to-report-animal-cruelty.html) and What to do when you see Pet Neglect (http://www.paws.org.ph/pet-neglect-what-to-do.html).

We do have to inform you that euthanizing the impounded dogs after the holding period is not a violation of the Animal Welfare Act. It is not a crime, it is legal when done by a licensed vet using humane methods set forth in the AO on Euthanasia.

Hope this information has clarified things.

Just for your info - we were able to file criminal charges against the people responsible for the slaughter of the dog in the film ORO because there were witnesses who came forward and executed affidavits detailing their personal knowledge about the crime committed.

We would need the same – affidavits from witnesses – in this particular case if we are to take action and file a case against anyone who is neglecting or being cruel to the pound dogs and there are violations of the Animal Welfare Act.

If you read and understood my entire reply, I mentioned that we can file charges if there is a witness who can execute an affidavit regarding any neglect or cruelty happening in the pound.

In addition, there is nothing illegal about euthanizing pound dogs if they follow the humane methods set forth by the law which is also in accordance with the Animal Welfare Act. Most if not all impounded dogs who are not adopted or claimed are PTS (put to sleep) or euthanized in many other city pounds.

As an volunteer-based non-government organization with no law enforcement powers and whose volunteers are ordinary citizens just like yourself, PAWS can provide free legal assistance and can assist in filing charges for violations of the Animal Welfare Act if there is a witness who can submit an affidavit (including the name and complete address of the animal offender).

Sadly, without an affidavit from a witness, a case cannot be filed. Most people nowadays prioritize posting on Facebook instead of drafting their affidavits for our lawyer's free review. We think it is because they feel it is enough to shame the animal offenders on social networking sites.

Do share our complete response to your friends so that they can read it for themselves and understand the entire picture and not just snippets or a summary of your accusations or misunderstandings.